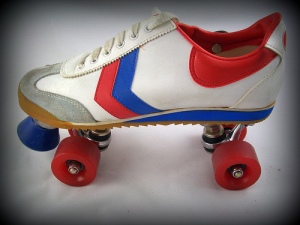 This week’s mix is an ode to the Roller Disco on Mixcloud.com

The track listing is:

‘Good Times’ was released in August 1979 during the height of the Disco craze. The song climbed to Number 1 in the charts, was the musical basis for dozens of songs and went on to become one of the most sampled tunes in the history of music.

Throughout the second-half of 1979, Chic played several Hip-Hop events with Blondie and ‘Good Times’ proved to be a favourite among the young breakdancers who attended. At the end of the year, front-man Nile Rodgers was in a New York club when he heard the DJ play a song that had ‘stolen’ the bass line from ‘Good Times’. The thieves were identified as The Sugarhill Gang and the song turned out to be ‘Rappers Delight’. Although legal action was initially threatened, The Sugarhill Gang offered to credit Rodgers and Bernard Edwards as co-writers on ‘Rappers Delight’. They agreed. Hip-Hop had its first commercial song and it hit the big-time with the opening phrase:

I said a hip hop, the hippie, the hippie to the hip-hip-hop, a-you dont stop
The rock it to the bang-bang-boogie, say up jumped the boogie to the rhythm of the boogie, the beat